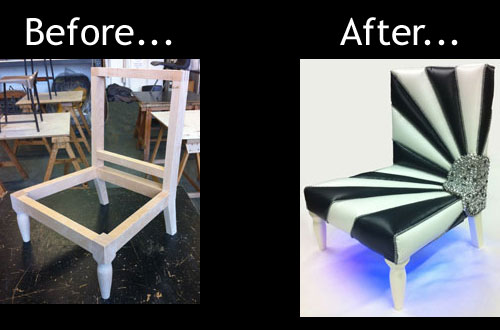 The Disco Chair was made for the Heico competition. Each year in October, upholstery training centres from across the UK are invited by Heico to submit mood boards of their design for a child’s chair. The primary criteria are that the designs should be on a standard frame, as in the photo above, and that they should feature the decorative upholstery nails which Heico specialise in supplying (along with other upholstery tools and products). Some entrants, including myself, were fortunate enough to be chosen to make up their design to submit for the competition. I was kindly sponsored by the lovely people at Kayospruce, the leading supplier of high-performance materials for the marine and leisure industries: they provided and delivered the fabric to me at no charge.

I made my chair for a very special little boy called Solomon. I asked his parents what his interests were as inspiration for the chair. One of the things he loves is disco music (unusual for a toddler!) so the theme was chosen. I based the design on an abstracted disco glitter ball. The idea was also to show off Heico’s lovely crystal nails to a creative advantage. 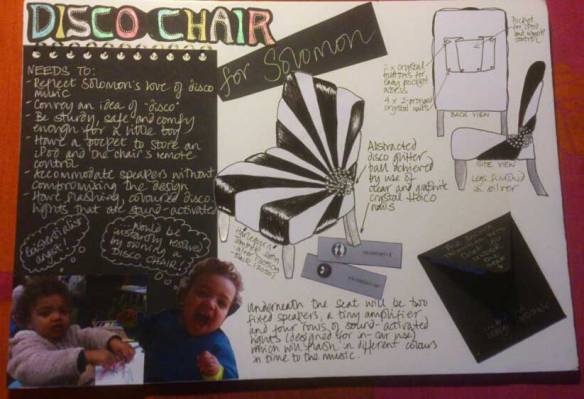 Mood board for my Disco Chair competition entry

It took a lot of prototyping as there were any number of ways it could have been approached. The back-tacking method was the one chosen in the end to achieve the cleanest divide between each flute. Using fabric that was not intended for quite this sort of upholstery was a challenge indeed – most vinyls stretch when subjected to heat or steam but the PVC I used was bulletproof! This made the finer points on corners and so forth quite difficult. However, it does mean that the chair is entirely strong and wipe-clean for a small child, a very important part of the final object.

I inserted a tiny amp and speakers into the base of chair and built a pocket in the back to take an MP3 player. A lithium ion power pack rests underneath and I added lights that can flash in time to the music and there it was – the disco chair was born! It can also just flash with lights, or just play music.

Because of the PRS issues with playing music in a public place, a piece of dance music was specially created for the chair by The Sugarman.

I was awarded second prize in the competition which was judged by members of the Heico team and Joan Milton, Marketing Director of the Association of Master Upholsterers and Soft Furnishers (AMUSF). The prizes were awarded by Ron Mercure, President of the AMUSF at a delightful ceremony at the Interiors Show at the NEC in Birmingham on 22 January 2013.

Heico prizewinners at the NEC, 2013